Friday night we had a Christian band from Holland come and do a concert in Youghal. Several of the band members grew up as missionary kids in Peru, and some had spent significant time in Ireland before, so the style was quite a mix of Peruvian, Celtic and Dutch… and they sang in three languages as well (but provided translations so we could all understand the message). If that mix of styles sounds interesting to you, you can here samples of their music on www.combotrinity.nl About 100 people came to the concert, almost half of whom were not connected to our group of churches.

On Saturday Seth took the band to where they could catch a bus to their next show, and in the afternoon we drove over to Blarney Castle to meet up with a couple of Seth’s friends from high school that are touring Europe and happened to be in the area!

Sunday the short term team from Texas did the service and afterward we had a barbecue. The Irish call outdoor grills ‘barbecues’, and if you cook anything on them you are having a barbecue – we had burgers and sausages that were sort of like hot dogs. 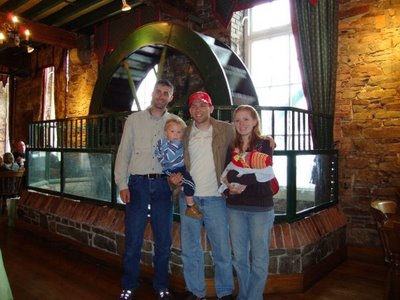 The picture is us with Nathan Jackson, Seth’s friend from High School