Seth’s dad was coming to Europe for a business trip anyway, so stopped in for a few days. Today we went out to the middle of nowhere to see a working monastery. It was one of the first in Ireland to be built after Catholics gained back most of their freedoms in the 1800’s. For 300 years before that, Catholicism had been suppressed by the English and things like monasteries were not allowed. Inside, the most prominent places were given to Mary, but there was also a shrine to St. Thérèse of Lisieux: 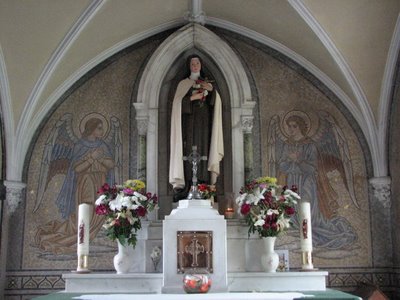 Why is that noteworthy? Well, it just so happens that her earthly remains, or “relics”, are touring Ireland as you read this! If you’d like an itinerary, click here.

A Thanksgiving tradition, and the importance of re

Flashback: to that time when Banksy shredded a wor