Just to give you a taste of how daily life is a bit different in Ireland than it is in the States, we’ll give you a quick overview of some of the differences in shopping here vs. shopping in America.

In downtown Youghal (like every other town, village or city), there are rows of small shops: 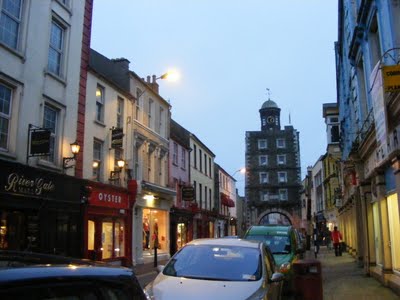 These shops sell all kinds of things – electronics, clothes, furniture, hardware, jewelry, etc. There banks, butchers, bakeries, book stores, toy stores, and restaurants. Downtown is where you go for most things – you just have to know what store has the thing you want. The cool thing is that after you go a few times you start getting to know the shopkeepers.

There are also supermarkets for groceries. Youghal has three, and the biggest is called Tesco. It’s just a couple blocks from the shops downtown. Tesco is not as big as a Kroger in America would be, but it’s big enough to have pretty much anything you’d need – unless you’re looking for graham crackers or Ranch dressing. And some things have different names here, for example: baking soda is called bread soda, diapers are nappies, ground beef is steak mince, and “squash” is a concentrated drink. Meats and veggies are sold in Kilograms, not pounds. When you get a shopping cart (trolley) you have to put a Euro coin in it to release it, but you get it back when you put the cart away. You also bring your own shopping bags – but if you forget, you can always buy new ones when you check out. Oh, and the carts have four-wheel steering. It sounds like a little thing, but it really changes the way you have to push. On Saturdays there is a fresh market in a parking lot downtown. We get a lot of our fruit and veggies (or just “veg” here) from there. Yum.

In bigger cities like Cork and Dublin, there are department stores that sell clothes plus housewares, etc. They would be more like a Belk than a Wal-Mart, and not as big. Bed Bath and Beyond would be considered a big store here (and it’s called Homestore + More). There is also something like Home Depot that’s called B&Q. Seth likes that one. The closest mall to us is almost an hour away in Cork, and you can walk the length of it in a few minutes. But you know… it’s starting to look big to us…

A Thanksgiving tradition, and the importance of re