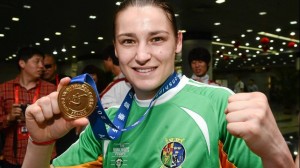 Katie Taylor has been a household name in Ireland for a while now, after winning four straight boxing world championships. But she’s become even more of a symbol of Irish pride now that she’s bringing home Olympic gold (the only gold we’ve got so far) in the first-ever Olympic women’s boxing event. But that’s not all there is to Katie. She is very openly Christian, and often quotes Scripture in interviews. Some folks have been confused by her faith because she isn’t Catholic, but this article from the Irish Independent did a good job of explaining evangelicals to a unfamiliar culture: