This week a tragedy struck close to us. A five year old girl, who had just started at the same school our children just started at, died suddenly in the night. Yesterday we went to coffee morning held in aid of her family. This is what we saw:

The room was buzzing with conversations in every corner, the kind you’d have expected as soon as you saw the cups of tea and tables full of cakes. Some of the people were in large groups, some were in couples, and the chairs were nearly as full as the tables. Volunteers roamed, filling cups and gathering rubbish. It was the definition of a successful coffee morning, until she came.

The reason we were all there: The Mother.

She never said a word, and only stayed a few minutes. But her presence was a power: as soon as she entered, the conversations died, unable to stand before the awesome force of her grief. In her hands she held a small decorative light someone had given her, held it like it was the most precious thing in the universe, held it like it was the sweet little girl she had lost suddenly to a sickness that came out of nowhere and robbed the light right out of her eyes. She sat down. She cried freely in front of a whole room full of cakes and eyes. A friend eventually broke the silence by saying thank you to everyone for coming. A priest said something about Mary over and over again. Then they left.

As I looked at my cold tea, I realised that now I knew what the Bible meant when it said: “The voice of Rachel, weeping for her children and refusing to be comforted, because they are no more”

Last Friday Seth got to reprise his role in Les Mis from earlier in the year in an encore performance. It was great fun all over again, so he was glad he got “one more day”… 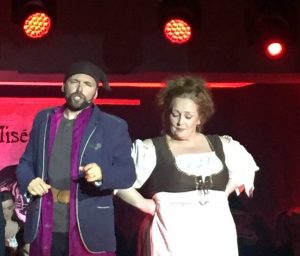 “I know what’s better,” said He
“Just wait and see
I have a plan
Just wait for me”

With every sin
We say to Him:
“Get off Your throne, it’s mine”

We yell and scream,
We shake our fist,
We tell Him He does not exist
And finally…
We nail Him to a cross

And somehow,
He does not resist –
He lets us kill,
He goes to die,
And finally… a cry:
“It is finished”

We tried to push Him
From His throne,
And down He came –
But on His own:
He came to die our death
He came to bring us home

In honour of Jessica’s birthday today, here’s a little poem about global warming:

Some say “The world is warming!”
Well, I don’t know, but I
Can tell you – if it’s true –
I know the reason why

This day some years ago,
The sun stooped down to earth
To warm and shine upon
A newborn baby’s birth

The Sun, he was impressed,
He visited awhile,
Then took some burning joy
And put it in her smile

“What’s warmed our crazy world?”
I’ll tell you what I say,
The answer’s plain as plain:
She laughed and smiled today

This weekend, Seth sang in a fundraiser concert featuring most of the songs from the musical ‘Les Miserables’. It was lots of fun to sing songs like ‘One Day More’ with an amazing group of singers (including a few professional vocalists), but what really makes Les Mis a great musical is the depth of the story and it’s contrast between law and grace – intentionally pointing us to the grace of God. To be able to do that with masterful music is a bonus!

The Days Are Full

Every year I think there will be extra time to get things done in January and February, and every year these months fill up much faster than I think. It is true that there are a couple of weeks after Christmas when things go fairly slowly, but those days are long gone now. Of course, having lots of lines on the to-do list isn’t a bad thing. The challenge is finding the balance, making room for what matters most, and leaving the things we can’t control in the hands of our faithful Father.

Idols. What are they? Other gods, right? Almost no-one believes in them nowadays, right? Wrong. Idols are anything and everything that we put before God. When you are saving up to buy or getting something awesome, you could be idolising that awesome something that you’re going to get. Or you could absolutely love something that you already have, like a power tool, family, friends or money. You can idolise anything except God. To try to love God and something else would be a complete failure. Jesus said that Himself: “No-one can serve two masters. Either he will hate the one and love the other, or he will be devoted to the one and despise the other. You cannot serve both God and Money.” (Matthew 6:24) What he’s saying is do not attempt to serve two things at once. Choose one. Choose God if you want eternal life in heaven, true joy and wisdom. Anything else will lead to destruction, disaster, and hell, even if it looks like a good choice. The Bible condemns idols strongly. Probably the most famous condemnations are the first two of the Ten Commandments: “You shall have no other gods before me. You shall not make for yourself an idol in the form of anything in heaven above or in the earth beneath or in the waters below.” (Exodus 20:3-4). Many people think they are serving God, who they were made to serve and love, but they are actually serving something else. On the day of Judgement they will say “Lord, Lord did we not prophesy in your name, and in your name cast out demons and preform many miracles? Then I [Jesus] will say “I never knew you. Away from me, you evildoers!” (Matthew 7:22-23) Another great many people choose money or other things when faced with the choice. Woe to them! All people who do not choose Jesus, the Saviour as their master will anguish in hell for eternity and their life will be destroyed like the foolish man’s house that was built on the sand. That’s the bad news. The good news is that everyone who chooses Jesus as their master and is faithful to Him will reign in heaven forever! Who will you choose?

The universe
Expanding
It was flung out of Your hand

The stars and all
Proclaiming
More than I can understand

Jessica’s whole family arrived yesterday to celebrate Christmas with us in Ireland! Logistics were a bit tricky to plan for a dozen of us, but thanks to help from friends here it’s working out brilliantly. It’s the first time several of the family have been to Ireland at all, so we’ll definitely have fun showing them around, but mostly it’s just wonderful to be together as we celebrate Jesus’ birth!

What is patience but pure generosity? New on the

A public post box installed during the reign of Ki